You would have probably seen alligators here and there. But I am sure that you would not have seen a huge alligator like this one ever in your life! This giant creature literally looked like something from Jurassic Park and people were really shocked to see the creature as it walks casually across the golf course in Florida.

Even though golf might not be a game of huge interest to many, a golf course in Florida took the attention of many people not because of the game but because a huge alligator has decided to take a walk across it and its enormous size captivated everyone’s attention.

The footage was shared by Charlie Helms, who was enjoying the luxury of a quite golf game at the Buffalo Creek Golf Club in Palmetto, Florida. He was totally amazed when his game was interrupted by the huge reptile that walked across in its slow phase without considering the amazed observers at all.

The footage shows the alligator making its way across the golf course to a lake nearby and Charlie could be heard saying ‘that is the biggest frickin’ alligator I have ever seen in my life. Jeez, this thing must be 15 feet long. Another man added to this ‘You gotta be kidding me’. 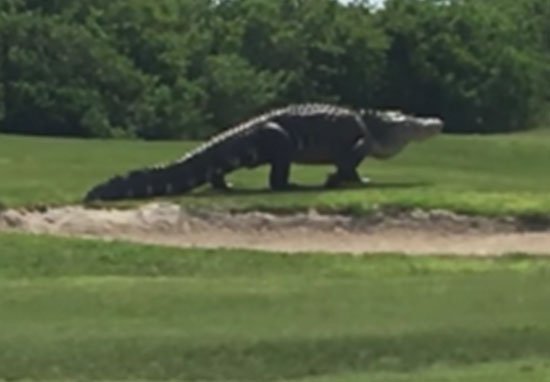 The caption of the footage read:

“Talk about a hazard! A giant alligator took a stroll across the fairway, making his way to the lake beside the third hole at Buffalo Creek Golf Club.

I hope no one hits their ball into that lake – they could be in for a nasty, 15-foot surprise if they went after it. Still unable to believe his eyes at the size of the alligator, one man said ‘I think that is two guys in an alligator suit’!

I kind of hope it was two guys in an alligator suit, they’d have pulled off quite the prank”.

“A friend and I were getting flagged down by other golfers who were pointing to this giant alligator on the 3rd fairway. We were shocked by the size of it so I recorded it to show my family and friends. I never expected it to get this much attention”.

Commenters on the video were also shocked by it:

“omg dude….you could not pay me to get 1 step closer to that beast! Dang!”

“The thing is almost a dinosaur”

Who knows, perhaps the giant beast might have taken a leisure stroll after all!