We all love to see turtles. They are the harmless, cute creatures who are so loveable and that is why many moms let their kids have a turtle instead of a cat or a dog. So, here we have a big news for all those turtle lovers!

When Detroit DJ Robin Micheal upload a video with the caption “The biggest turtle I have ever seen”, it went viral as the video showed a giant leatherback in the shore. It slowly tried to reach the water and many onlookers who were amazed by the huge sight of the turtle stand in distance watching all its movements. It reached for the sea line, pushes itself into the sea and after few pushes, it disappeared among the giant waves.

Leatherbacks are largest turtles on Earth and they grow up to seven feet long and exceeds 2,000 pounds. These animals are considered as the only remaining representatives of a family of turtles that inherits an evolutionary root back more than hundred million years. However, due to many reasons, there has been a decline in the growth of this population and every year we hear that so many conservation laws are imposed with the intention of protecting them. 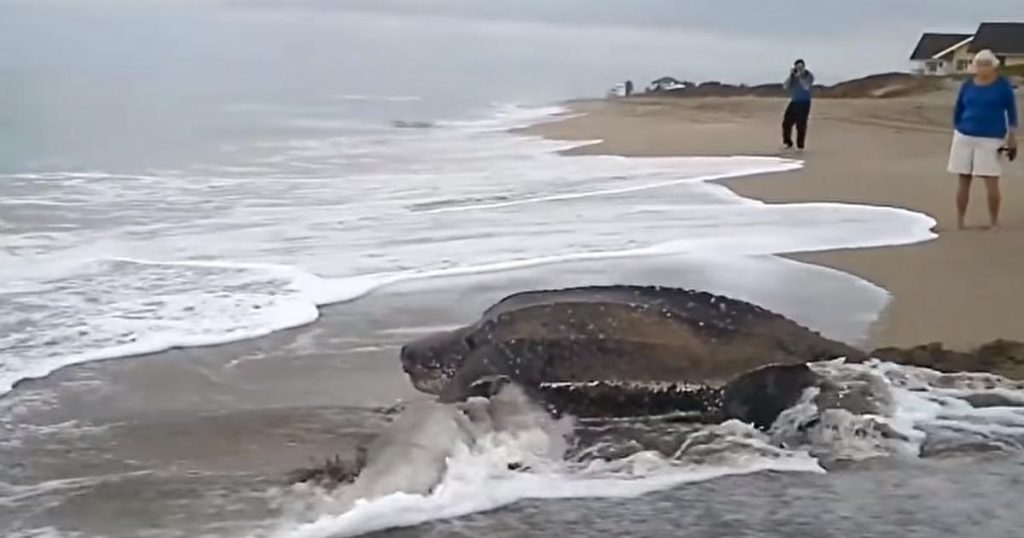 These turtles are mostly found in Atlantic and Pacific oceans near the equatorial line and also off the coast of Central America. They crawl out of the water only in their nesting season to lay eggs in the shore and it is said that their eggs almost resemble a golf ball in size!

We all have a duty to protect these creatures and many of the things that we do daily, they are lives are at a huge risk. So, watch the video below and I am sure that even you would be impressed with its huge size!